He spoke 10 different phrases, can you remember them all?  In the audio recording below we can hear most of them.  When you click the triangle icon at the left of the long gray bar directly below, you might need to wait a few seconds for the recording to load.  And just like when you cranked Big Loo in 1963, sometimes you get some repeats!

CONSTRUCTION OF THE TALKING MECHANISM

The actual talking mechanism is very primitive but brilliantly designed from the perspective of keeping production costs low.  It consists of a vertically mounted thick plastic disk, not a record but thicker like a platter.  A very basic metal needle is directly mounted to a speaker cone made out of a very thin clear plastic, almost like cellophane.  This is what allows it to vibrate and produce sound.  Do you remember as a kid, placing cellophane over a comb and playing it like a kazoo?  This was the exact concept that Marx used.  It is so fragile that you can tear it by flicking your finger on it, that is if you could get the head off.  The speaker cone points directly to the back of the Robot’s teeth. That is why the teeth appear to have black outlines, there are actually slots so that you can hear the sound.

The needle and attached speaker cone are mounted to an arm that tracks across the platter when you turn the crank. When it arrives at the end of the recording it climbs a tapered cam at the center of the platter where it then lifts the needle.  Because the arm is mounted with a strong return spring, it immediately swings clear of the platter and it is swiftly pulled back to the outside edge of the platter. 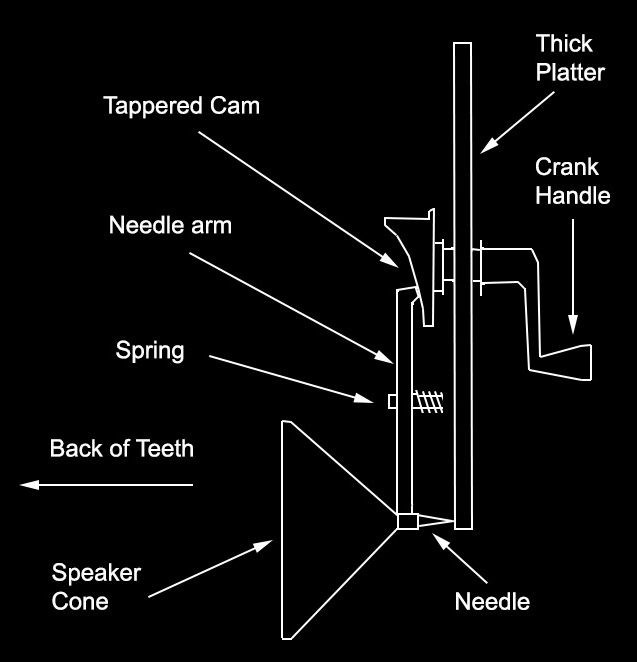 It is purely random as to which of the start of the 10 tracks it arrives on.  Which means you could hear the same phrase over and over again, or not.  Each track starts at farthest edge of the platter and ends at the center where the spindle mount and the tapered cam is located.  You really have to crank quickly to get the platter to rotate fast enough to understand the phrase.  Of course too fast is as bad as too slow!  In the outtake from the original instructions below, Marx attempted to explain the problem to the new 8 year old owners.  Did you read the instructions when you got your Big Loo?

HOW AN EIGHT YEAR OLD BROKE THE TALKING MECHANISM

Because many owners were too aggressive with their cranking speed, it is not unusual to find Robots with broken handles.  The prototype had a metal crank handle but by production time, it was changed to plastic most likely because it was cheaper.  It is also common to find Robots with large holes cut into the side of one of Big Loo’s ears. Understandably, it was quite frustrating when the voice mechanism stopped working and owners were desperate to get inside the Robots head to find out what was wrong.

Sometimes owners forced objects (such as crayons) through the Scanner Scope opening which fell down into the area where the delicate talking mechanism is mounted.  In one Robot we took apart, the heavy platter spindle nut had fallen off inside causing the crank to simply free spin.  But perhaps the number one cause of a failed talking mechanism is from objects poked through the teeth slots, remember the holes that let the sound through?  This tore the delicate cellophane-like speaker cone.  Most likely it was Mom’s kitchen knife but a nail or similar pointed object would of inflicted similar damage. 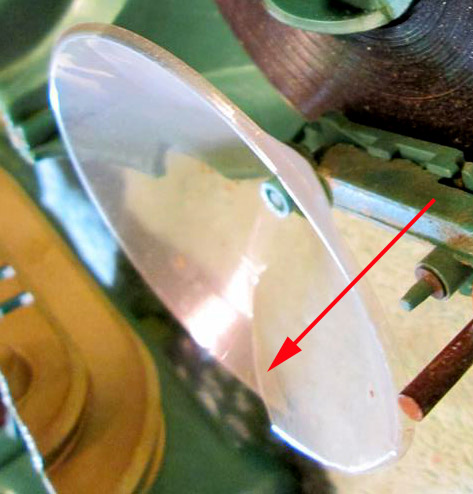 The bad news is that only broken handles can be replaced.  When you buy a reproduction handle, it includes the spindle nut, the tapered cam and the exterior handle.  The first two items are useless as you will not be able to take apart the head without severely damaging both the body and the head.  This is because Marx permanently glued all the parts together during assembly at the factory.  The repo handle instructions advise you to cut off the old handle instead.  Then use a  dowel and epoxy to mate the crank shaft, which is doable.

To fix a split or punctured speaker cone is impossible as far as we know.  To fix other issues with the mechanism is far more complex than you would want to tackle.  And that is if you could take apart the robot and put it back together again which as we pointed out, is not possible without damage due to the glued surfaces and the extremely brittle plastic.  These are some of the reasons why intact talking Big Loo’s command such a premium.

A PEEK INSIDE THE HEAD