Before we comment on the author and his views in this article, we have included this overview of the Huffington Post from Wikipedia. Then you will find an image of the original article as it ran online and lastly we provide observations of the impact of this article on the collectability of your Big Loo Robot and the out fall of the public’s perception on this famous Marx Toy Co. product.

The Huffington Post was launched on May 9, 2005 as an overtly liberal/left commentary outlet and alternative to news aggregators such as the Drudge Report, and some still consider it to espouse liberal views. On February 7, 2011, AOL acquired the mass market Huffington Post for $315 million, making Arianna Huffington editor-in-chief of The Huffington Post Media Group.

In July 2012, The Huffington Post was ranked #1 on the 15 Most Popular Political Sites list by eBizMBA Rank, which bases its list on each site’s Alexa Global Traffic Rank and U.S. Traffic Rank from both Compete and Quantcast. In 2012, The Huffington Post became the first commercially run United States digital media enterprise to win a Pulitzer Prize.

“What were they thinking?” Yes, that’s a phrase one hears often if you work in the toy industry.  But you also hear, “Crazier things have worked!”  The fact of the matter is that both are true.  Some of the wackiest ideas have been surprise hits that left some people rolling their eyes—but manufacturers laughing all the way to the bank.  Here’s a bunch of wild ideas that either made millions or got people talking.  Many of them are featured in my new book, “TOY TIME!: From Hula Hoops to He-Man to Hungry Hungry Hippos—A Look Back at the Most-Beloved Toys of Decades Past,” on sale now from Three Rivers Press. 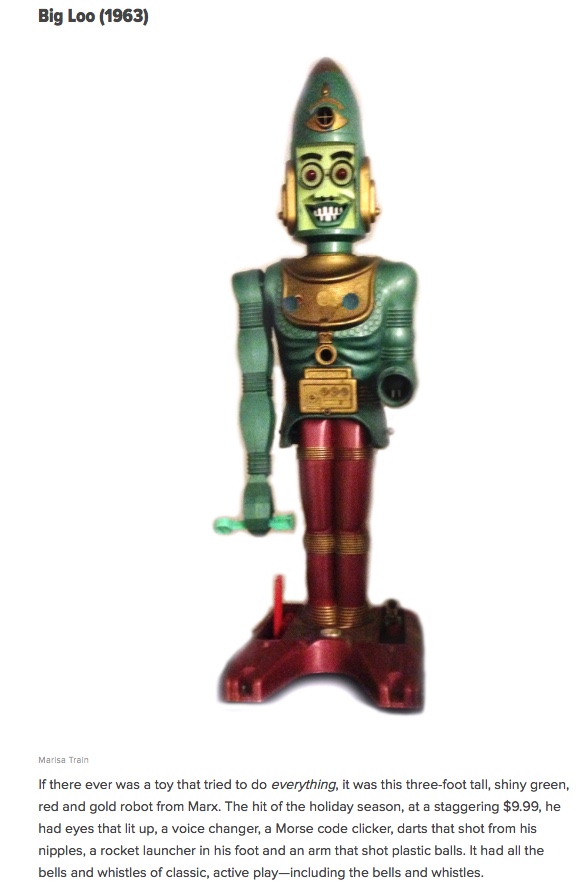 Mr. Byrne who authored this article is certainly entitled to his own opinion.  However, when it is published and viewed by millions of readers, a certain responsibility of facts come into play.  We find it odd that the text describing the toy itself appears to be very complimentary.  Yet Mr. Byrne categorizes Big Loo among the 11 Weirdest Toys Of All Time!

This begs the question, what does this mean to you as a Big Loo Robot collector.  We feel that it has downgraded both the collectability of your Robot and its’ value in the collector market.

Then there is the question of the publics’ perception of this collectable toy.  In our opinion, it too has taken a negative hit.  From now on Big Loo collectors will be viewed by some as that “11 Weirdest Toys” person.  As concerned Big Loo collectors what can we do about this situation?  We know that Mr Byrne will eventually read this website blog as his name will be searched on in the future and this article will appear.

We are requesting that Mr. Byrne write a follow-up article on Big Loo and reference the facts this this toy has brought positive memories and feelings for 50 plus years and that he was misguided in cataloging the Robot among toys with minor positive influence. Further, that the Big Loo Robot does indeed have a silly grin but that every other aspect of this toy was among the most premium features of any 1960’s toy.  We are waiting Mr. Byrne.