Of all the weapons that Big Loo came with, this is the one that got most owners in trouble. Parents and friends might shrug off an occasional dart or missile in the leg but when someone got wet, their attitude usually deteriorated rapidly. Below is a pristine example of the mighty Water Ray.

In fact, this is the weapon that usually got confiscated by Mom and placed in some hidden location to be kept “safe”.  At least Mom remained dry after that.  So it is not surprising that many surviving Big Loos today are missing the Water Rays as the “safe” location was forgotten and the Ray was never reunited back with Big Loo.  If your Big Loo is complete with a working red Water Ray, your investment has increased value.

It is not surprising that many owners don’t refer to this weapon as a Water Ray. To agree on what to call this weapon, we must examine the documentation that survives today. There are 3 sources of known information about Big Loo.  The original instructions that came in his giant box, the product box itself and the 1963 television marketing commercial. Let’s take a look at all the misleading references. On page one of the instructions, we find an illustration that talks about filling a “Syringe”. 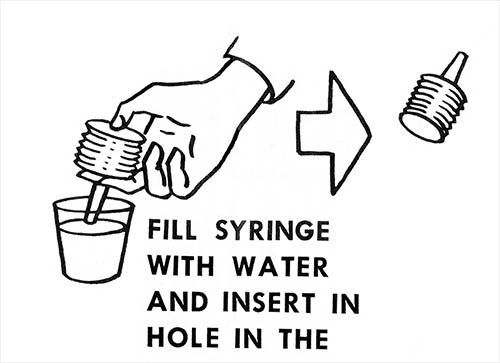 Page two of the Instructions illustrates a device they refer to as the “Water Shot Bellows”. 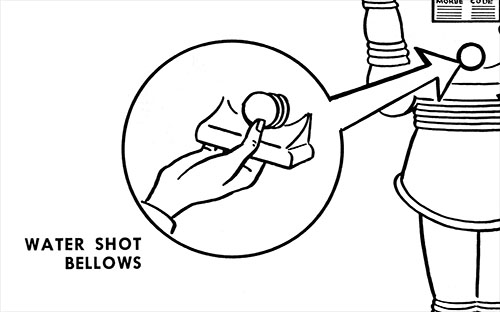 On the bottom of page one of the instructions, the Parts/Replacement section refers to E-1 as a “squirter”. 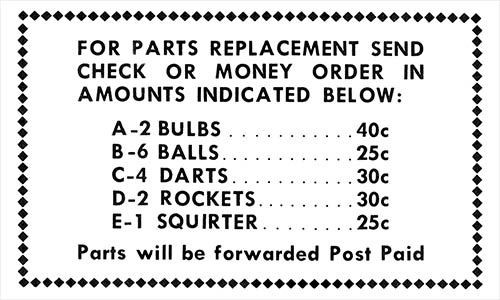 Turning to the 1963 TV Commercial at the 23 second mark, we hear the announcer stating: “Can anything stop him? No!”  And then the Water Ray releases its furry right into the camera’s lens. Although we see the ray in action, it goes unnamed. 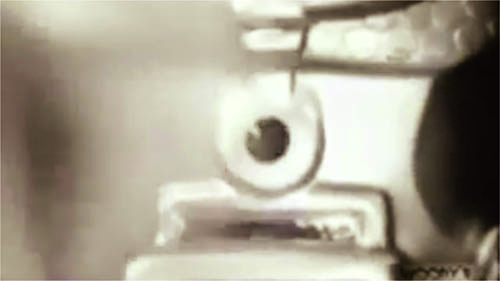 On Big Loo’s giant box with all the Robot’s features and weapon names listed we can easily see that the middle of the right side panel is printed “Shoots Water Ray”.

That is quite a bit of misleading information! However, most enthusiasts agree that because of the many inconsistencies among the instructions, that the product box should be credited with assigning proper names. To that end, we officially refer to this weapon as the Water Ray.

Turning back to the fact that a surviving Water Rays can be hard to find, let’s discuss the reproduction market as it exists today.  We have seen reproductions out there but because of its complexity and as previously mentioned, these are often solid non-working replicas. No squirting going on there! Other Big Loo weapons that are solid in their construction to begin with are not only easy to cast and reproduce in resin, but carry off the illusion with ease. But a working accordion style bellows is much harder to make.  It is doubtful that we will see an accurate custom reproduction of the red Water Ray but as our hobby grows, so does the value of reproductions and the drive to make them.

But there are exceptions of course. Below is a composite photo of several eBay auctions were yellow Water Rays have been observed. In the lower left we have inserted original red Water Rays which are have a very different shape than the yellow versions. It appears that these yellow variants are not a different Marx Toy Co. color change but a reproduction. The shortened shaft and the absence of an end piece to direct the water are of a concern. 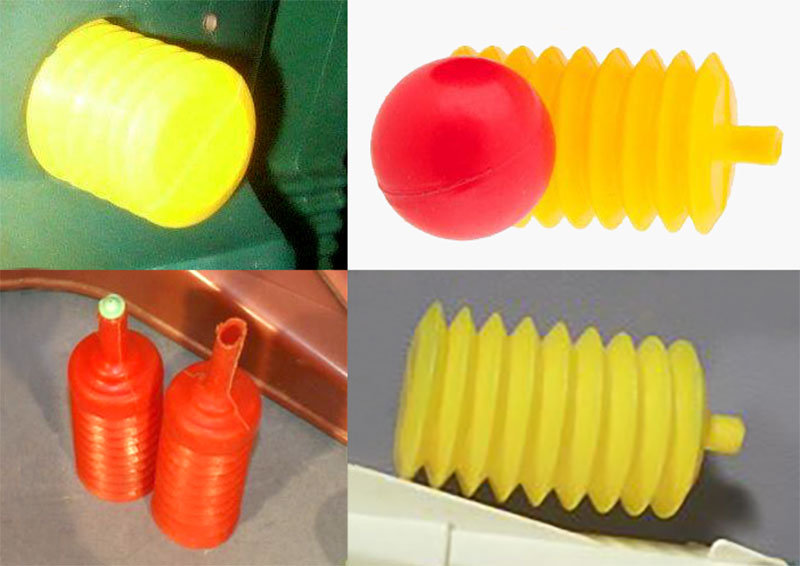