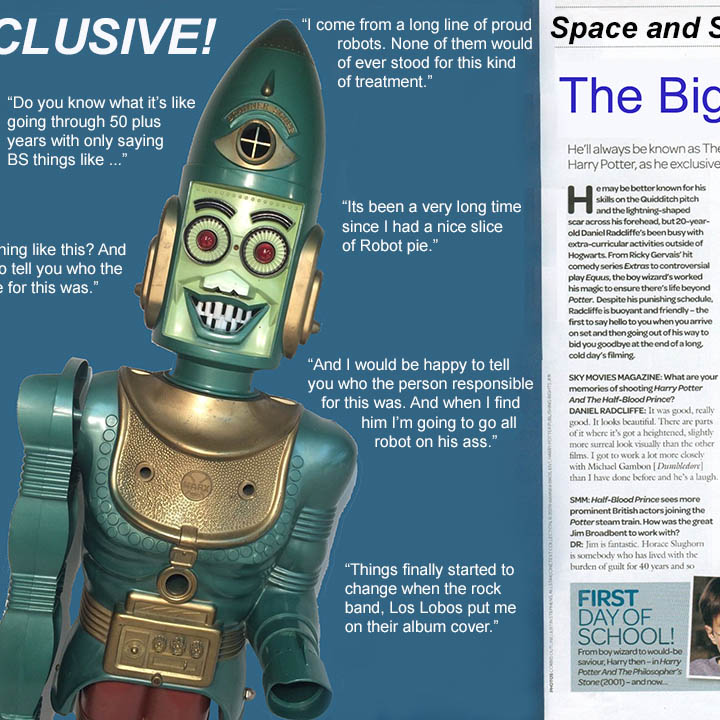 The following interview of Big Loo occurred at the offices of the Space and Science Almanac Magazine and showcased the Robot’s new Artificial Intelligence to Cerebral Translator 2000 machine which allowed Big Loo to completely communicate for the very first time. The interviewer is Bernard Munson of their public relations department.  Mr. Munson is excited to interview the first robot in history.  Additionally, Mr. Munson was gifted an actual Big Loo Robot during Christmas of 1963 which made this interview opportunity even more special for him.  He later stated that he was surprised to see Big Loo rolling in and towing a large piece of electronic equipment behind him which later was identified as the A.I.C.T. 2000 device. We now join Mr. Munson and Big Loo for an informal interview.

SSAM       We would like to thank you for sitting down with us today and being interviewed. Wait, I see you are only bending, wouldn’t you be more comfortable sitting?

SSAM       Well OK then.   To start off, we understand that the Huffington Post just named you among “The 11 Weirdest Toys of All Time”.

BL              Yes I saw that and I have to tell you that it really hurts. I have feelings just like everybody else and you would think that after 50 years of working for you, fighting for you and picking things up for you, that I would be treated better.

BL              Well, I know exactly why. Its because of my smile! Just take a look at what they did to me! You think I like grinning like this? And I would be happy to tell you who the person responsible for this was. And when I find him I’m going to go all robot on his ass.

SSAM        Wasn’t he in the 1963 Marx commercial with you?   The one they called “The wild imagination of kooky Professor Lair?”

BL              Yeah, that’s the one. I had this deal with the Marx Toy Co. to relocate from the Moon and be duplicated so that my brothers and I could be placed into children’s homes during the 1963 Christmas season on a special N-400 immigration status.

BL             Yeah we had a deal. Then some suit at Marx told Mr. Kooky to change my mouth feature from what we had agreed on to this bizarre grin. The Marx exec claimed that I would frighten the kids if it didn’t look more friendly. Hell, it says “Your Friend From the Moon” right on the friggin’ box! Professor Lair threw me down onto the duplication table and bingo – I came out like this!

SSAM       We are listening Big Loo and we are here for you.   We never knew it went down like that.   To tell you the truth, we all thought you were just supposed to look weird.

BL            Thanks, what I was trying to say is that almost as bad as that shit eating grin they stuck me with is that they limited my voice to just 10 phrases.  Do you know what it’s like going through 50 plus years with only saying BS things like “Take me for a walk?” I mean, I have a lot to say!

SSAM      We can only imagine that Big Loo.   So sorry but tell us, you are communicating now.   What changed if we may be so bold to ask.

BL          Well, I was able to get in touch through a third party over at GoDaddy.com and they hooked me up with this ‘Robot A.I. to Cerebral Translator 2000’ and I was able to create a web site and use this device to communicate completely via text.  Turns out some smart dudes at the Home Brew Computer Club had been working on this side project down in San Jose, and I knew this guy …

SSAM       Well we are impressed sir.   Sounds like you are very connected literally and figuratively.

BL             Yes, it has been a good turn of events. Things finally started to change when the rock band,  Los Lobos put me on their album cover. That’s when I first started to get some cred.

SSAM       I’m sure it will be a success.   Turning to a more personal question –  is there a Ms. Loo in the works or are you just dating?

BL             Oh man, that is a tough question.  I’ve been looking for quite a while now but so far all I run into is 3 foot Robots that look exactly like me.  I’m more interested in something a little more shapely if you know what I mean? And she would have to be a good cook.  Its been a very long time since I had a nice slice of Robot pie.  I even put my recipe up on my website if an interested lady Robot is reading this.