Everybody’s favorite weapon seems to be the Space Rocket!  It was probably enjoyed the most because of its considerable range and high impact force.  When you opened Big Loo’s giant box, new owners found a separate bag containing Big Loo’s weapons which among other things, included two Space Rockets.  The long tapered rubber tips had to be twisted on each rocket and then you were ready for business. Marx officially called them a Soft Rubber Nosed Projectile.

Collecting a Big Loo today often requires a hunt for the elusive Space Rocket.  If you are lucky enough to find a robot that already has a rocket, you almost always see ONLY one supplied.  As previously mentioned, two were originally packaged so that is the number that would make your robot the most complete.

Each rocket was 6 inches long and came in at least two colors.  Although we mostly see yellow rockets today, white ones (or ivory) are also correct.  Owing to the fact that they are not as prevalent as the yellow, they may have been part of the early production runs. However, as mentioned in our other articles, colors of accessories varied from time to time.  It is thought that this may be because there was occasionaly difficulty with obtaining manufacturing materials or simply because there was an excess supply of one color or another.  After all, the Marx Toy Co. was in business to make a profit and materials and overhead would sometimes that precedence over consistency.

As collectors search for a Space Rocket, they should keep in mind that Marx included this rocket design in their other toys as well.  Namely the Cape Canaveral Playsets as well as their Guided Missile Launcher.  If one was having difficulty finding a confirmed Big Loo rocket, a substitution from one of these other toys an easy solution.  Reading various blogs and webpages, we see folks wondering if each Marx rocket was the same size and if it will fit their Big Loo Launcher.  To answer that question, the Marx Toy Co. made only one 6 inch rocket with the rubber nose and used them for almost 15 years in their many toys.  Below is an example of a Guided Missile Launcher and you can see that the rocket measures out at 6 inches.  Check out that massive spring! 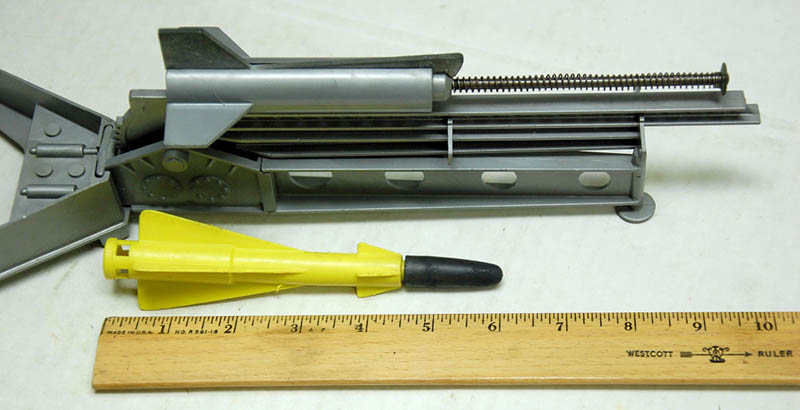 After all, productions costs were always a concern to keep profits as high as possible so the reuse of a good rocket design only made sense.  If the Marx toy in question advertises a 6 inch rocket and you see the familiar double fin shapes (8 in number) and a main body step down just forward of the the middle in the large fins, you can be assured that it will fit the Big Loo launcher.  Below you can see an example from the Marx Cape Canaveral Playset, these are also known as the “Compass Launcher”.  So named because of a small compass that fitted in the base.  Just be aware that Marx made many versions of the Cape Canaveral Playset starting in 1959 and lasted until the early 1970’s.  The contents always varied and some contained the yellow 6 inch rocket and many did not.

If you have trouble locating a correct Cape Canaveral Rocket, don’t forget to be on the lookout for the Marx Guided Missile Launcher.  It seems to be less expensive as well and it always has the 6 inch rocket with rubber nose.  However, you can re-use the launch spring from the Compass Launcher in your Big Loo but be aware that you cannot fit the Guided Missile spring in his launcher!  In the image near the top with the ruler, you can clearly see how much more massive and long the spring mechanism is.  Below is another shot of the Guided Missile Launcher and you can see “Soft Rubber Nosed Projectile” in a red circle on the left side of the box.

And then there are the tips! As usual some controversy regarding correct color exists.  Black seems to the most common but we also see light blue rubber tips, although they are much more rare.  One collectors reports that he has also seen blue and green swirled tips on an original Big Loo (Doc at TrademarkClassics).  One constant remains is the long slightly narrowing shaft.  Any reproduction that does not have this design would not be correct as we have seen one example that had a bugle near the end.  Some have tried to categorize which tip color goes to which rocket color on which Marx Toy but at present, we need more input from fellow collectors to establish a firm database. 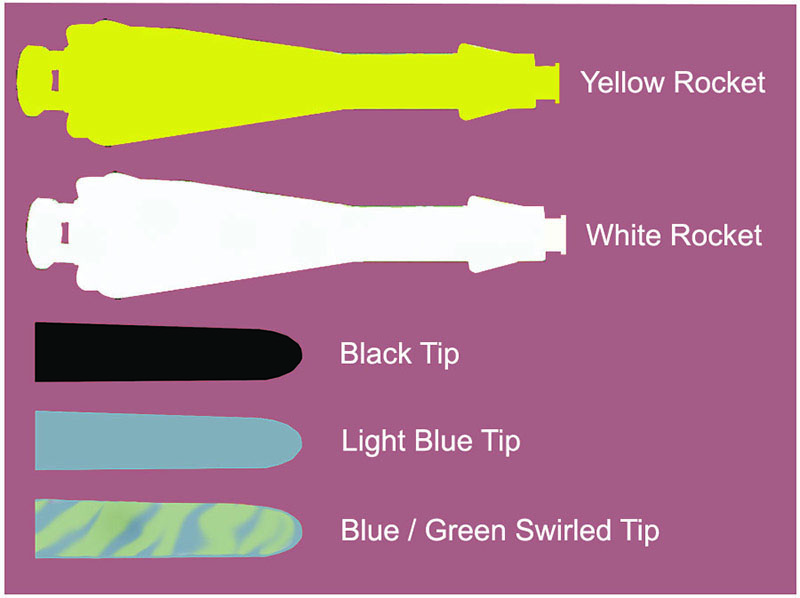 Unfortunately, 50 plus years of age has not been kind to the Marx Co. rubber products as we often see cracking near the base of the rubber tips.  This often occurs at the point where the inside flange is holding the rubber tip onto the rocket body.  Another major problem with the older rockets is that the mounting base that locks into the launcher also tends to get chewed up with hard play use.  If your rocket has a non-cracked rubber tip, non-nicked fins AND the mounting base is without wear, your Rocket should be graded as FINE.  Currently, there is not a source for replacing the rubber tips. 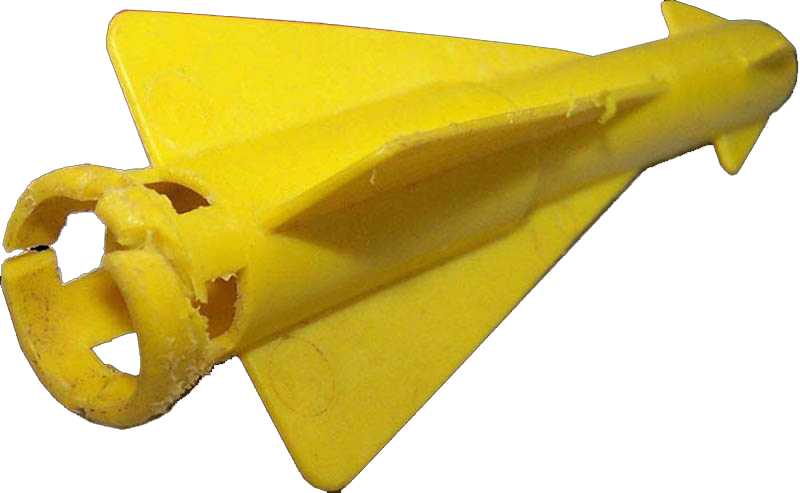