We classify this story in the urban legend section. Research as we might, there is no official documentation that the Big Loo Robot derived its name from the president of the Marx Toy Company; Louis Marx. But if true, what a great story.

It makes sense that the marketing department would pay tribute to their company president by using the nickname “Loo” when naming their new robot. We say this because they had to come up with a “friendly” type of name but just what do you call a moon robot? It’s easy to understand why they went with “Big” as the robot is 3 feet tall. And for a toy robot, that is big indeed. So if they were looking for a somewhat comical as well as friendly name to go with “Big” a simple name like Loo would certainly work! And all the while it could be a secret insider term of respect for their company leader; Louis Marx.

Mr. Marx started his company in 1919 in New York City. But it was not until they released the Yo Yo in 1938 that his toy business became extremely successful. And the rest as they say is history. Louis Marx became so successful that he even made the cover of Time Magazine in 1955. By that time he was known as the Toy King of America. 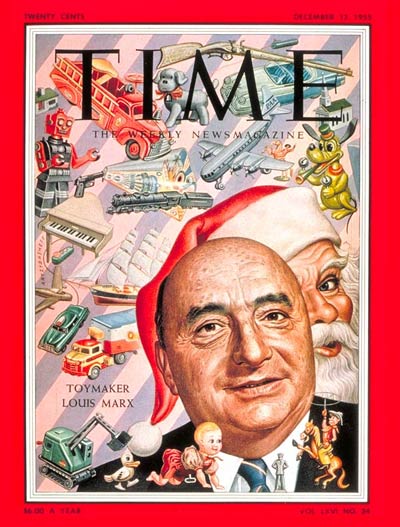 So when our friend from the moon appeared in 1963, it was just another successful toy launch for Louis Marx. But this time it is certainly possible that one of his toys’ wore a name that made reference to the company president himself! At least we would certainly like to think so. If any readers out there in the Big Loo Blogosphere know of a reference that lends credibility to this possibility, please leave a reply below.

Louis Marx sold his company to Quaker Oats in 1972 for a reported $52 million. At the time, Marx was 76 years old. Mr. Marx would pass to the great toy box in the sky in 1982 at the age of 85. He left behind a great legacy and countless hours of wonderful play time in the minds of children all over the world. But could his legacy also live on in the form of a nickname used on one of his creations called Big Loo?