My many weapons and defensive features allowed me to survive the Great Moon Battle referenced elsewhere on my website.  My standard exterior weapons are obvious to see but did you know that my Battle Chest Armor has extensive features as well?  You may have wondered what the dials were for but in this article, I explain in nauseating detail what everything does and how it operates. Below is the master diagram that was issued to me in Robot College and below that are my explanations taken from my notes during class.  We start from the ride side at the top of my Battle Unit.  Working toward the bottom we finish at the Lower Armor Skirting. Then start again on the top left and work our way down. Stay with me now and please pay attention! 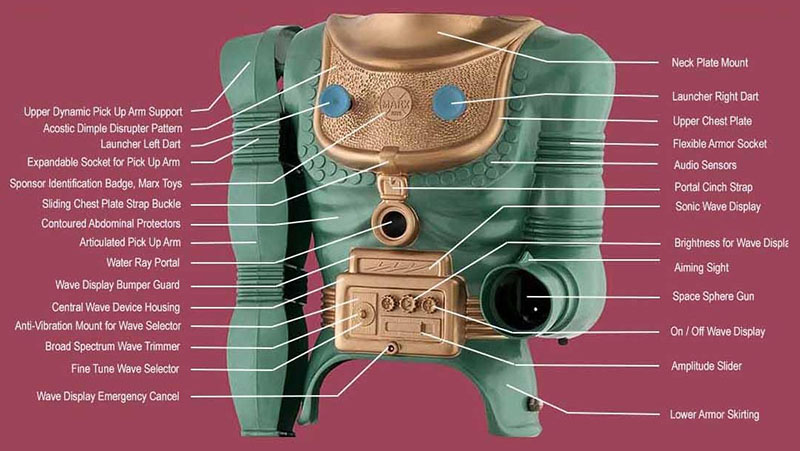 Well there you have it. I studied hard on this to achieve my Moon Second Class Robot status. The Moons’ different environment warranted each one of these well thought out battle systems.  On Earth, war is waged by the use of physical impact.  However, on the Moon – Robots engage in conflict by utilizing subsonic signals or interstellar waves to disrupt and even harm the enemy.  Even though the Moon’s surface is a vacuum and contains no air for sound to travel, subsonic signals are in a special category that only Moon Robots can detect.  There is no Robot killing, just severe sonic disruptions of Robot life systems which mimic long periods of inactivity.  Yes, I guess that is kind of like being dead (but only for a while).  We Robots fear those long period of inactivity just as much as you Earthlings fear your kind of death.