Although my main weapon systems are located at my Chest Battle Armor, my Battle Transport Platform is almost as important.  I remember back at Robot College, my professor began the Transport Platform lecture and I thought it would be easy to its systems.  But we spent 3 weeks on the Space Rocket alone!  And then there was the emergency repair scenarios to address a failure of the transport mechanism.  I was impressed that the Wheel Axles could be quickly swapped out but unless you have  Support Assistant ‘Bot at the ready, well you have a big problem!  That almost happened to me at the Great Moon Battle which you can read about elsewhere on this website.

During that battle, I was confronted by the leader of the fearsome Assembly of Important Robots.  I had to make a quick get away to avoid a full yield Yellow Space Rocket.  My transport mechanism will only do 3 MPH at best so I had to come up with a quick plan to avoid a Sonic catastrophe.  I ended up diving over the side of a steep crater because my Transport System has limitations.  To be absolutely honest with you, my slow transport mechanism is the only real flaw in my entire Moon Robot design.  Just don’t tell that to the Assembly of Important Robots.

Here then, is a detailed explanation of my Battle Transport Platform.  We start on the right side at he top and then work our way down to the Starboard Front Bumper Assembly.  Then we go left to the top and finish the rest of the systems one by one until we end at the Transport Platform Main Assembly. 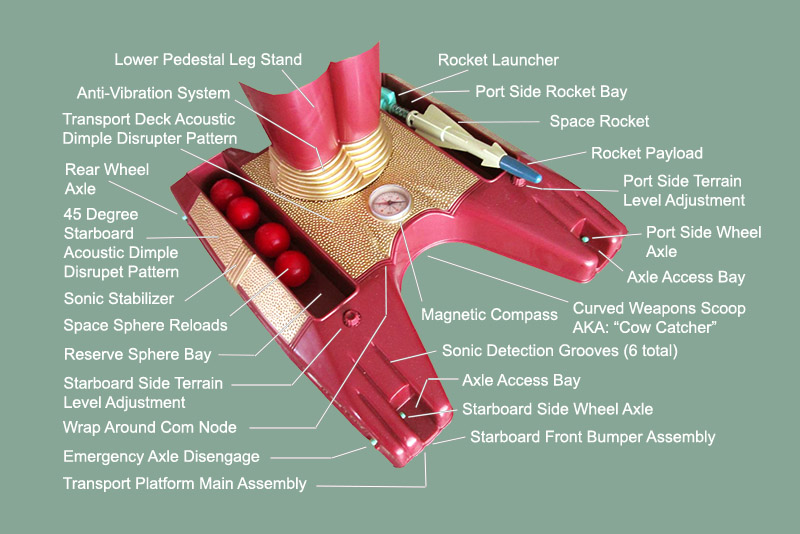 I sincerely hope that this diagram gives you an appreciation for this great technology.  The development of the Moon Robot Battle Transport Platform was a break through for modern day Moon Robots.  On Earth, war is waged by the use of physical impact.  However, on the Moon – Robots engage in conflict by utilizing subsonic signals or interstellar waves to disrupt and even harm the enemy.  Even though the Moon’s surface is a vacuum and contains no air for sound to travel, subsonic signals are in a special category that only Moon Robots can detect.  There is no Robot killing, just severe sonic disruptions of Robot life systems which mimic long periods of inactivity.  Yes, I guess that is kind of like being dead (but only for a while).  We Robots fear those long period of inactivity just as much as you Earthlings fear your kind of death.